Most people are aware several years ago Noah’s Ark was discovered in
Turkey on Mount Ararat, beneath snow and volcanic debris. Much of it is
intact !

It has been carbon dated to be 4,800 years old, which fits the Biblical account perfectly.

Animal stalls with food still in them, petrified animal dung and broken antlers.

The parts that are there match the description in the Bible as well
as its location . Scripture states in Genesis 8 verse 4 , “ the Ark
rested in the seventh month on the 17th day of the month upon the
mountains of Ararat “ .
There’s that # 7 again , signifying The Creators Re-creating after the cleansing flood . 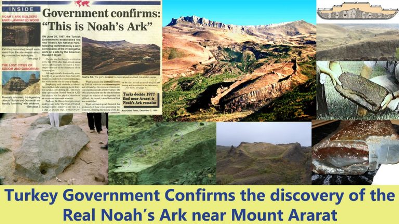 Below is an aerial view of Noah’s Ark. 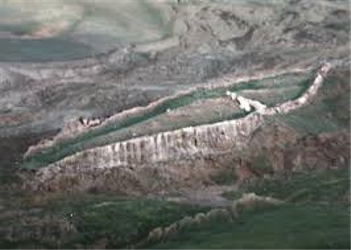 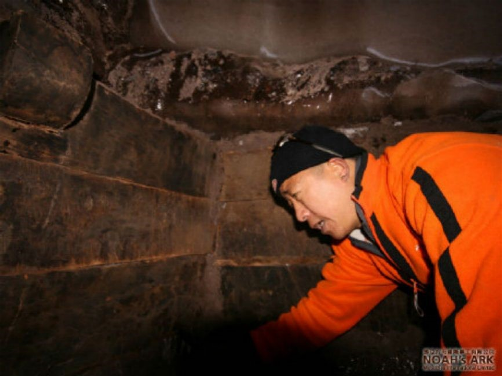 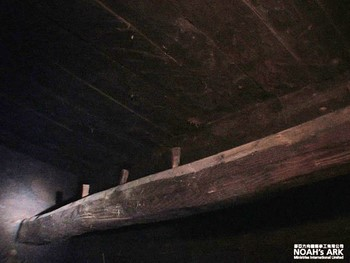 On another related point of science agreeing with the Bible  ,in Israel
during the last several years , archaeologists have been unearthing many
finds like ; the ruins of Sodom and Gomorrah . In Genesis 19, the
account is told how these cities were destroyed by flaming sulfur ball
hail, fire and brimstone, rained down from Heaven, for their sexual immorality, fornication and sodomy. Sodom is where we get the word sodomy from. 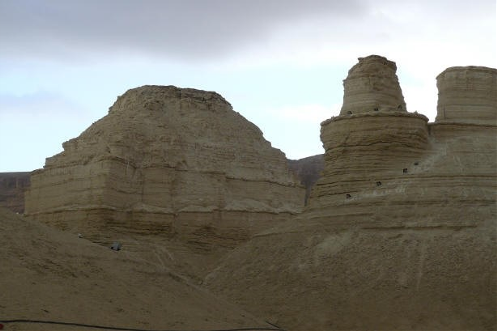 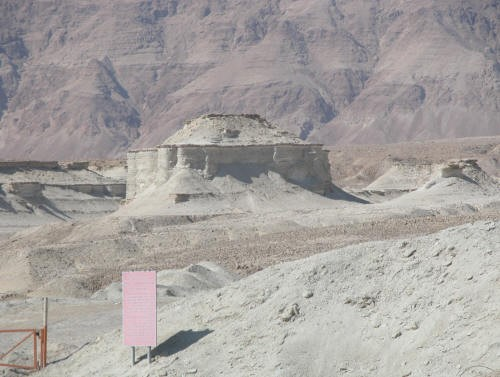 Each of the cities of the plain contain evidence of “ brimstone “
which Almighty God rained down upon the cities to destroy them ! The
brimstone, of golf ball size,

is composed of 96-98 % sulfur , with trace amounts of magnesium which create an extremely high-temperature burn .

This is the only place on earth where you can find 96 % pure monoclinic sulfur in a round ball !  This ” brimstone “ is NOT from
any type of geothermal activity, since there isn’t evidence of any such
in the area , and besides , geo-thermal sulfur nodules are only 40 % pure sulfur and are of the rhombic type .  This is one of a kind as The Creator is one of a kind ! 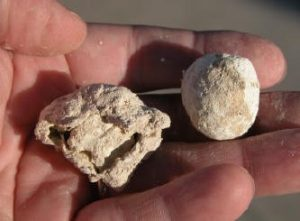 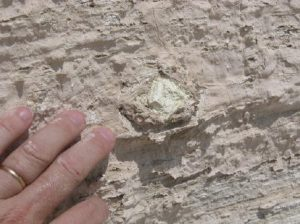 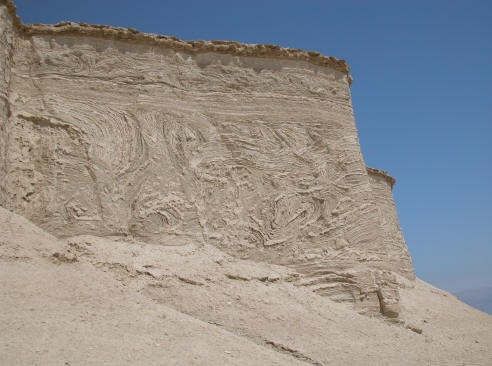 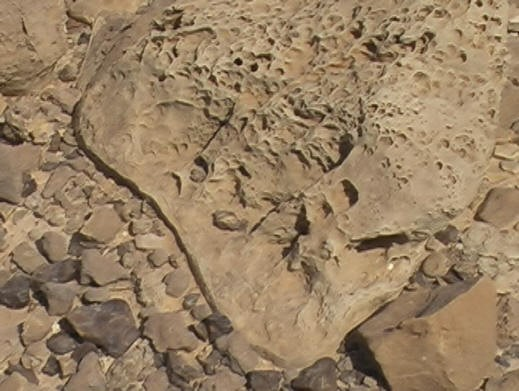 In Egypt the remains of Joseph’s Palace have been excavated , in
Goshen , where the Israelites were given residence by Pharaoh , after
his brothers sold him into slavery . There are several characteristics
that identify this structure as Joseph’s Palace . Underneath the
foundation was found the remains of a Syrian style house , which is
where the Israelites had come from .The palace above it had a spacious
and elegant layout , not common for this dwelling place of the
Israelites , but more for Egyptian royalty .

Joseph’s brothers being
jealous of him had sold him into slavery but he had favor with the
Almighty and rose to be a powerful advisor to the Egyptians . Because of
this , this structure had both Egyptian and Semite characteristics in
architecture . All around it were smaller more modest dwellings with
only Semitic characteristics. The property had two distinctly separate
apartments on it , undoubtedly for his two sons Ephraim and Manasseh .

It had 12 tombs and 12 pillars , one for each of the 12 brothers/12
tribes of Israel . There was one other tomb in the shape of a small
pyramid . This signified that although being an Israelite he was
considered Egyptian royalty .  Inside there was a statue of a medium
completed man with red hair in a customary mushroom shaped hairstyle of a
Israelite nobleman .

Around his shoulders could still be seen the
colors of multi-striped coat . This of course is the famous Dreamcoat .
Over his shoulder he had a Egyptian throwing stick , an established
symbol of the Pharaohs authority . This fits the Genesis 50:25-26
scripture that says ; “ and Joseph took an oath of the children of
Israel saying Almighty God will surely visit you and you shall carry up
my bones from hence , so Joseph died being a hundred and ten years old
and they and embalmed him and he was put in a coffin in Egypt “

The
statue had been anciently smashed in a way that showed the hatred of
intentional defacing , literally the face was focused on for damage .
Hatred is exactly what the Egyptians would have felt , for any Jew ,
after the plagues , the Exodus and destruction of Pharaohs army , by the
Red Sea collapsing on them . Of course over time you would have
expected the valuable personal belongings in the tomb to have been taken
by grave robbers , but the bones were gone also .

There wasn’t the
usual careless damage to the tomb done by grave robbers , instead there
was evidence of careful brick by brick removal . This showed the careful
and respectful removal of Josephs body on Holy Land .

In order for Moses to have been able to identify his tomb it must
have been well known and marked , as it was , for him to have been able
to fulfill the following scripture . Exodus 13:we 19 states , “ and
Moses took the bones of Joseph with him for he had straightly sworn the
children of Israel saying , Almighty God will surely visit you and you
shall carry up my bones away hence with you “ .

There is much more archeological evidence such as ; Solomon’s wall. 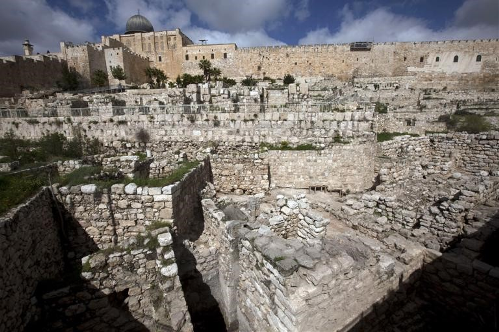 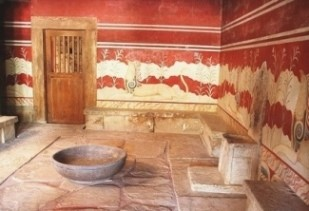 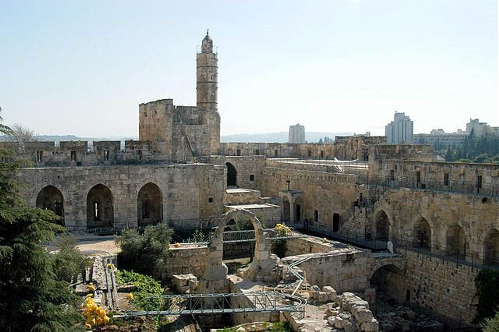 Herods Palace, where the trial of Christ occurred. 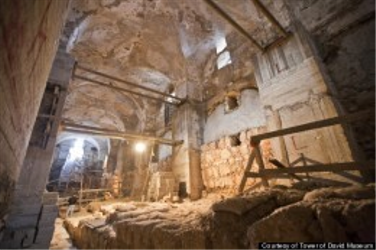 Even pottery with SPECIFIC names from the Bible written on them have also been discovered !

This amazingly specific discovery was , two bullae , (clay seals on
an official royal document) , were found on the east side of the city of
David, bearing the Hebrew names, “ Gedaliyahu ben ( son of)Pashur “ and
“ Yehucal ben Shelemiyahu ben Shovi “ . These Hebrew names are exactly
recorded in the Anglicized King James Version , showing these bullae
were the seals of two princes , specifically mentioned in the Bible ,
both of them together in the same verse , who persecuted Jeremiah !
Jeremiah 38:1 states , “ Then Shephatiah the son of Mattan and Gedaliah the son of Pashur , and Jucal the son of Shemalemih
and Assure the son of Shelemiah , and Pashur the son of Malchiah heard
the words that Jeremiah had spoken unto all the people “ .

These can be seen in Armstrong auditorium , in Edmond Oklahoma ,

due to the fact that students , from the Philadelphia Church of God
Bible College helping at the archaeological dig helped to uncover them . 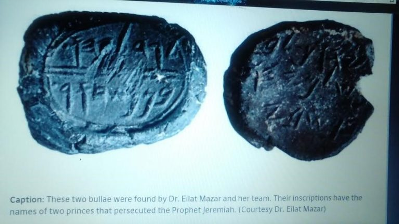 A bullae of King Hezekiah was also found . 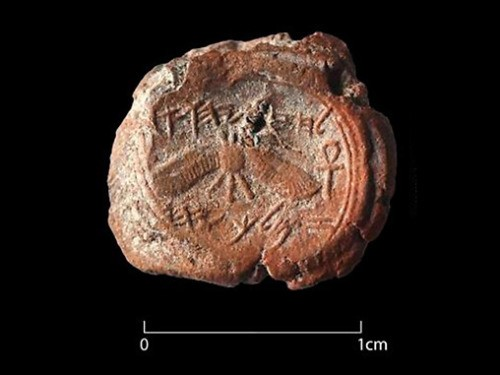 Recently a 1,750-foot aqueduct , was discovered , that brings water ,

to this very day , from the Gihon Spring on the east side of Jerusalem to the west side . Two scriptures chronicle this  , 2nd
Chronicles 32-33 states , “ this same Hezekiah also stopped the upper
watercourse of Gihon , and brought it straight down to the west side of
the city of David . “

2nd Kings 20: 20 confirms this ; “ and the rest of the acts of Hezekiah and all his might , and how he made a pool , and a conduit , and brought water into the city , are they not written in the Book of Chronicles of the kings of Judah “ 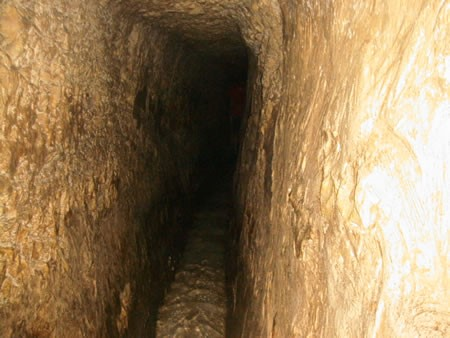 This aqueduct was an engineering marvel . A few of the amazing facts are ;

it was carved straight through bedrock with nothing but hand tools ,

over its 1,750-foot length , it only drops one foot in height , from
one end to the other , creating perfect pitch for flow and was done with
two groups of men working with pickaxes from two separate ends ,
meeting in the middle !

If you were to walk through this tunnel today , you can still see the
marks even showing which direction the men swung there pickaxes , as
they chipped their way through the hard stone .

At the halfway point , where the two teams of men met in the middle ,

you can read an inscription commemorating the completing of it .
Examination of the Hebrew script shows it to be written in the very
style dating to Hezekiah’s time period , although some of the old Hebrew
words are partially worn away so the inscription is not word perfect .
It says ; “ when the tunnel was driven through while we were still with
axes each man toward his fellow and while there were still 3 cubits to
be cut through , there was heard the voice of a man calling to his
fellows , for there was an overlap in the rock on the right and when the
tunnel was driven through the quarrymen hewed the rock , each man
toward his fellow , axe against axe , and the water flowed from the
spring toward the reservoir , 1,200 cubits and the height of the rock
above the head of the quarry men was a hundred cubits . “ This
inscription parallels both the biblical and the geographical facts . 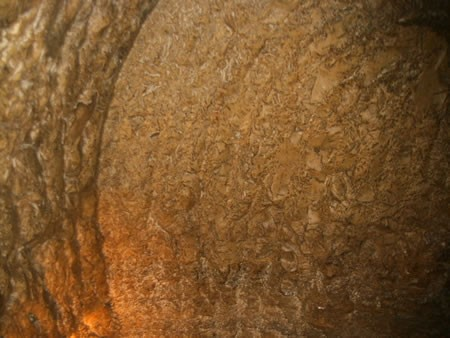 At the opening of Hezekiah’s Tunnel is the Pool of Siloam. 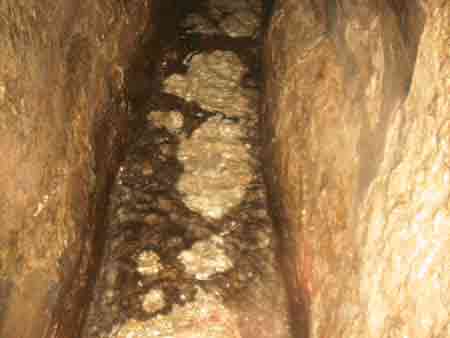 At the opening of Hezekiah's Tunnel is the Pool of Siloam. 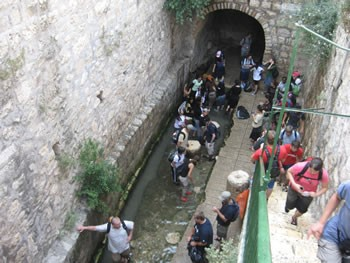 Another example of archeological proof of the veracity of the Bible,
is the utterly destroyed remains of the city of Jericho were found with
evidence of all of the walls having fallen down and outward , just as
scripture says .

Also , the city shows signs of utter destruction and burning with fire .

This is all in exact agreement to what the Bible says in Joshua 6:
20-24 . Furthermore the remains had been carbon dated to the exact time
when Israel would have been entering the Promised Land . 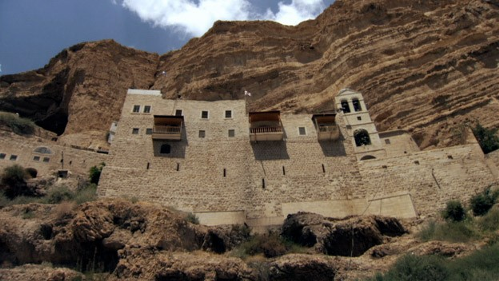 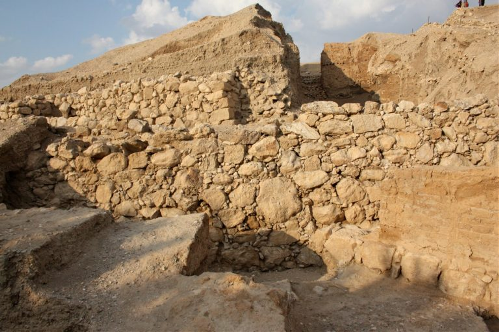 Another impressive artifact found is the Mesha Stele , a four foot
tall engraved black stone recording the victories of the Moabite King ,
Mesha .

On this stone is mentioned the Israelite King Omri , the tribe of GAD
and the Vessels of Yahuwah . One of the scriptures mentioning the
events between King Meisha and Israel is , 2nd Kings 3:4-5 , which
states , “ and Mesha king of Moab was a sheep-master , and rendered unto
the king Israel a hundred thousand lambs , and a hundred thousand rams ,
with the wool .  But it came to pass when Ahab was dead , that the king
of Moab rebelled against the king of Israel . “ It also appears to have
mentioned the “ House of David “ , although there is some debate about
this , due to some damage on the stone. 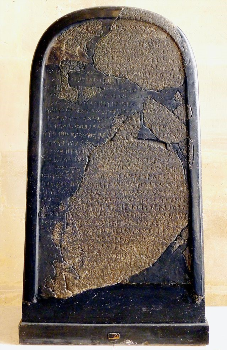 All of these finds are from the Old Testament , here’s one from the
New Testament . Everybody knows Pontius Pilate was the Judean prefect ,
who betrayed Christ with a kiss , to be scourged and crucified . 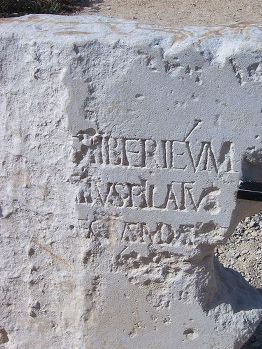 Obviously the full inscription , due to the damage of time , could
not be interpreted , but the clear reference to Pontius Pilate , Prefect
of Judea ,is unmistakable ! These are just a few of the more notable
archeological finds .  So for even the most hardened skeptic there’s
nothing like hard evidence ! Again, pun intended.

* Chariots, chariot wheels, armor, horses were found at the bottom of the Red Sea where it collapsed back over Pharaohs Army, after Moses parted the Red Sea, providing a way of Escape for the Israelites.
* In 2009 renowned archaeologist Dr. Elliat Mazar, using scriptures speaking of a "Stepped stone structure" and the "Capital",  that have already been found, constructed a map and told Israeli government officials exactly where King David's Palace would be found.
And now 10 years, later in August 2019, she has found it , exactly where she said it would be.
* Hosea 10:14 and 2nd Kings 17:3, and 18:9 "Shalmaneser" King of Assyria.  A black obelisk commemorating Shalamaneser III many Biblically documented deeds was discovered in 1845 in Nimrud (Nimrod)Iraq.
* Mansions of Israelite King Omri have been found.
* A carved relief of Lakish depicting how Assyrian King Sennacherib subdued the kingdom of Judah for a time.
* The Cylinder of Nabonidus the father of Belshazzar that ruled Babylon, mentioned in Daniel 5.

I know , despite all this truth , there are some skeptics, smart
cookies and pessimistic doubters out there that still have some
unanswered questions, due to the widely accepted archeology record of
cavemen and dinosaurs .  Trust me, no stone will be left uncovered. Pun
intended.  So here is the explanation on that …….