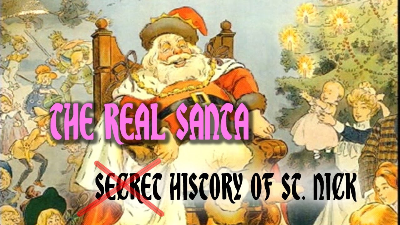 Even though not directly connected with Babylon , but confirming the Satanic origins of Christmas , I , as lead by Yahuwah to happen upon , is the definition of nick , as in Saint Nick, an older name for Santa Claus .  This definition is from a Webster’s Encyclopedic Dictionary from 1970 .I don’t know if a new dictionary would have such in depth
meanings as I found this old trusty book to have , so I’ve included a picture of the exact copy of the text , since I could scarcely believe it myself. 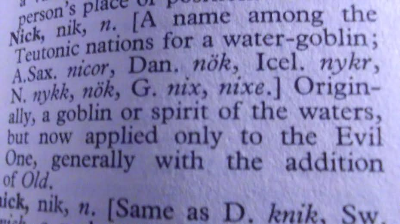 So basically , Nick is a very old German term for a water goblin or demon and when old is placed before it , it refers to Satan himself !

Several observations can be made from this .

1st , Christ is called , among other things , the living water .(John 4:10&7:38) It just makes sense for Satan to want
to inject something about a water demon into the false birthday of Christ , the LIVING water , that he created in the first place ! Demon water equals lies , idolatry , sin and  death , Living Water equals truth , freedom from sin and life . It just evidences his opposing nature , once again .

2nd , It wasn’t enough to associate a water demon with Christ’s supposed birthday  , but he had to take it one step
further and associate HIMSELF with it by adding Saint in front of Nick , making it mean , Satan !   I guess adding the word “ Saint “ in the middle is supposed to make it sound acceptable? So, actually the original meaning of the term Old Saint Nick is , Old Saint Water Demon or Old Satan !!! Interestingly , Revelation 13:1 states,”

The Dragon stood on the shore of the sea. And I saw a beast coming out of the sea “ speaking of the Beast, the Babylonian Whore that sits upon many waters (Catholic Church) rides.

3rd , To further flaunt off his skills of deception , when creating the more modern name Santa , he only rearranged two letters , to change Satan to Santa !

Furthermore , a phonetic pronouncing of the name Claus , is claws . Extremely fitting when you consider , Satan Claws are holding this world tightly under the grip of deception by observance of his counterfiet helliday AND it’s slick Satanic salesman icon , Santa ! He even wears the same colors envisioned to be worn by Satan , Red and black !  When taking the picture of this definition I noticed the second definition shown . Once again , I could scarcely believe my eyes. 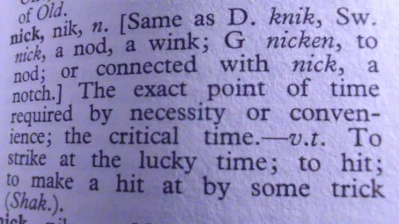 Several observations can be made of this as well .

1st , The definition says to strike at a “lucky” time . Luck is associated with gambling and is a Devils trait of reliance , as opposed to mercy and blessing from Almighty   God .

2nd , The definition says , “ to hit at by some trick “. Old Saint Nick plays a “trick” on us by “hit”ting all the right false,
festive emotional buttons at the , supposed “exact point in time” ! Although Dec. 25 is the darkest time of year, not when “The Light of the World would be born and this date has many unholy things associated with it. (note see chapter 26a)

Here are some scriptures about winking ………………..

3rd , The definition says “ a wink “ . Here are some scriptures about winking ;

Proverbs 10:10 says ; “ he that winketh with the eye causes sorrow “ . Proverbs 16:32 says ; “ He who winks his eyes does so to devise PERVERSE things “ . New American Standard Version. The first one is fitting in that , Santa’s winking causes sorrow by deceiving and misleading people away from truthful worship of Christ , by his false
festive holiday persona . In fact , the word Holiday originally meant a , “ Holy Day “ and this day is born of Satan and therefore , unholy ! ! ! ! ! ! !

What a “PERVERSE” “trick” ! That second scripture really fits , since everything about Christmas , is perverse ; from its origins of pagan sun worship and pagan gods , to its Roman name , Christ-mass , since there is not a Christ mass mentioned in the Bible , to  its date , being the darkest day of the year , to its traditions linked to pagan idolatry and sun worship (Nimrods Tree and wreath sun symbol) , to its icon Santa Clause , as the next section will clearly show .
Finally Psalm 35:19 says ; “ let not them that are my enemies wrongfully rejoice over me , neither let them winketh with the eye that hate me without cause  “ .

This scripture is fitting a few ways . Satan does certainly “ rejoice “ , as his Satan/pagan born icon , of this false holy-day , “ Satan Claws “ winks , deceives , and misleads people , with his false festive persona , created from pagan gods , who certainly do oppose and “ hate ” Christ !  Certainly Satan’s perversion of the birth of Christ , by his helliday and by this slick satanic salesman icon , evidences his hatred .

1st picture caption is “Wink,wink, sssh, dont tell anybody I’m a “perverse” lie of “hate” for Christ , that causes “sorrow” by actually , deceiving/misleading you AWAY from Christ ” ! 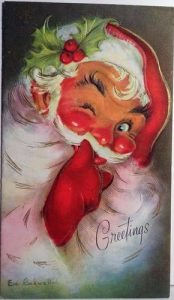 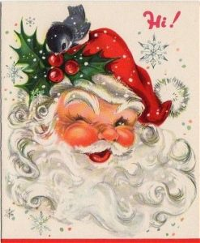 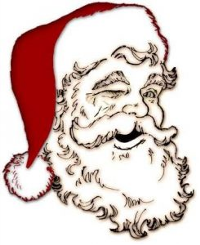 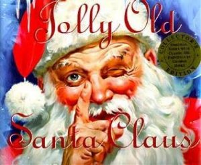 The Drama Before Shakespeare – A Sketch, author Frank Ireson, describes the popular Miracle Play. Notice the description of the Devil as “shaggy, hairy,” etc. (as Santa), and notice the devil’s trademark “ exclamation on entering was ho, ho, ho! “:

Besides allegorical personages, there were two standing characters very prominent in Moral Plays—the Devil and Vice. The Devil was, no doubt, introduced from the Miracle Plays, where he had figured so amusingly; he was made as hideous as possible by his mask and dress, the latter being generally of a shaggy and hairy character, and he was duly provided with a tail: his ordinary exclamation on entering was, “ Ho, ho, ho ! What a felowe [sic] am I. “ (Ireson, Frank. “ The Drama BeforeShakespeare – A Sketch. “1920 )

The Devil’s trademark “ ho, ho, ho “ was carried over from the early medieval Miracle Plays to the popular old English play “ Bomelio “, as the following lines from the play verify:
What, and a’ come ? I conjure thee, foul spirit, down to hell ! Ho, ho, ho ! the devil, the devil! A-comes, a-comes, a-comes upon me,. . . (Dodsley, Robert. A Select Collection of Old English Plays, Vol. VI. The Project Gutenberg Ebook. <www.gutenberg.org/dirs/etext06/7oep610.txt>) 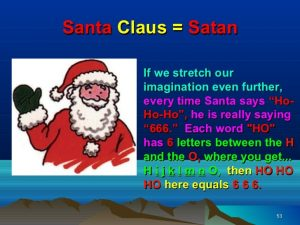 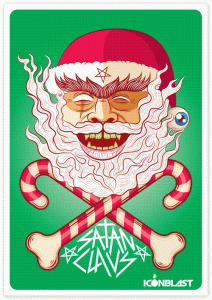 These pictures paint a thousand words ! 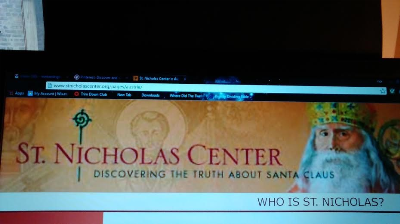 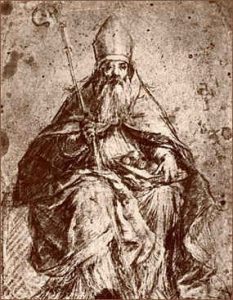 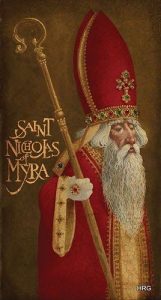 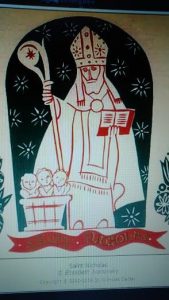 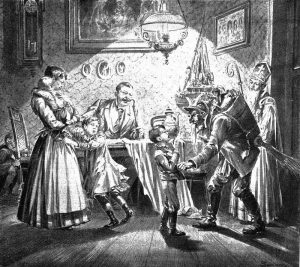 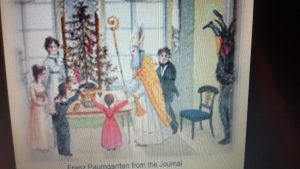 St.Nicholas and his Dark 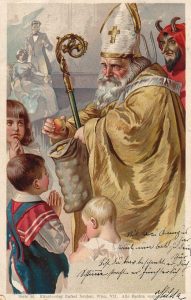 Satan is behind St.Nicholas 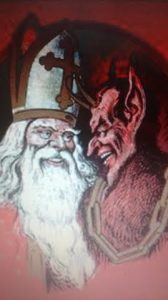 I know you’re appalled, you’re in disbelief, you’re in denial, that a long-cherished dear sweet icon as Santa could be connected with such evil . But it is !

Remember at the beginning of the website, I said, Truth is Stranger Than Fiction ? I’m sure the majority of what you have read so far lives up to that. This is no different ! You see, in order for Satan to sell his false Sun worshipping holiday as something holy, he needed help from a friendly endearing slick salesman.

Keep reading to discover the background of various pagan gods that made Santa Claus what he is today, SATANS CLAWS ON THE WORLD !