Stretch marks were also found elsewhere, which led Scientists at NASA’s Jet Propulsion Laboratory to announce on March 17th 2014 , our universe burst into existence in an event known as the Big Bang 13.8 billion years ago and moment’s later , space itself ripped apart and expanded exponentially in an episode known as “inflation” .

First , it must be said , in order to accept the original Big Bang Theory , one has to accept certain suppositions that fall outside the explanations of the laws of nature and physics .

Second , the Big Bang Theory implies that space , time and the universe had a beginning . Anything having a beginning must have a cause. What was that initial cause ? What was the power source of this “ Big Bang “ ?

Third , The Big Bang Theory is based on the premise that something , (the universe) suddenly came into existence, out of nothing  How could this happen ?

Before this discovery , of these newly found stretch marks , scientists theorized that this rapid expansion after the “big bang” would have left, cosmic stretch marks , which is exactly what they now , have discovered !

Co-leader of the project , University of Minnesota’s Clem Pryke said ,

“ It’s mind-boggling to go looking for something like this and actually finding it.    This is like looking for a needle in a haystack but instead finding a crowbar “ . The hidden meaning is in this discovery’s, phrase terminology ,

“ stretch marks ”, which confirms the Bible’s description of creation of the universe. Isaiah 40:25 says , “ thus saith the LORD Almighty God , the Lord He that created the heavens and STRETCHED them out , He had spread forth the earth and that which cometh out of it “.

This 2nd part of the last Scripture and this next scripture gives reference the stretching apart the earths crust as in spreading apart the primordial 1 supercontinent, Pangaea, into the separate continents which we have today .

Job 26 7 says ; “ He STRETCHES out the north over the empty place(where there previously was not land) and hang up the earth upon nothing “ .

Jeremiah 10:12 states, “ He hath made the earth by his power, he hath established the world by his wisdom, and hath STRETCHES out the heavens by his discretion.”

Finally Psalm 10 verse 40 says, “ who Almighty God STRETCHES out the heavens like a

The meaning of this is , astrologists have confirmed the Bibles description of creation, where the term stretched or stretches , which comes from the Hebrew word natah, is used a 11 times in Scripture !

Stretch marks occur when things expand or move quickly , as evidenced by a pregnant mothers stomach or a bodybuilders arms or chest , both growing rapidly so as the skin cannot keep up and thus leaving stretch marks .

When Almighty God creates or moves things HE works even quicker, as these various scientific findings illustrate, and the Big Bang Theory describe.  The Hubble Telescope has confirmed the Universe is still stretching or expanding .

Additionally , even this latest addition to scientists theory of creation ,

“ inflation “ , has a fitting scripture , Psalm 33:6 states , “ by the word of the Lord the heavens were made and all the host of them by the BREATH of his mouth . “

This scripture perhaps poetically suggests “ inflation “, as scientists have termed the initial rapid expanding of the universe , was by the very ” breath “ of The Creator ! 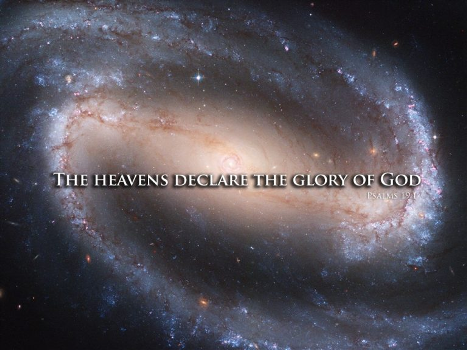