THE EVOLUTION FROM PAGAN GODS, ODIN/WODEN, AND THOR, TO FATHER CHRISTMAS AND SAINT NICHOLAS TO SANTA CLAUS

As you have seen there were several evolving transformations and combinations from these Norse/Germanic Gods , Odin , Woden , Thor , mythic 4th century Greek saint of children , Saint Nicholas , Father Christmas , the Dutch Sinterklass to get to our modern Santa .

The informal Dutch name for Saint Nicholas , is the Dutch Sinterklass . St. Nicholas was a mythic and creepy Catholic 4th century Greek , so-called , saint of children , known for gift-giving  St. Nicholas has evil hellpers that look like demons named; Furry Nicholas, Krampus Dark One, Devil, Satan.In the 17th century there was the Old English figure , based on the God, Woden , bringer of the Yule Log , known as Old Father Christmas , Sir Christmas and Lord Christmas , bringer of the spirit of good cheer thru drinking.

The St. Nicholas traits of children and bringing of gifts at Christmas were added to this .

This is a summary where Santa got his traits .

*  All of these figures had full white mustache and beards .

*  Odin knew your thoughts and actions .

Santa knows if you’ve been bad or good .

*  December 21st thru 25th , Odin went on flights through the sky , seeing who to bless or curse .

During the 12 Days of christmas, children wonder if Santa leaves you a gift or a lump of coal .

* Odin would fill the children’s boots with toys and candy .

Santa brings children small toys and candy in a stocking and they leave him cookies and candy .

*  Odin flew on an eight-legged horse .

Santa has  8 reindeer pulling his sleigh .

*  Odin lived in the frozen Northlands .

Santa lives at the North Pole .

*  Odin was lord over Alfeim, Land of the Elves. Santa is a lord over his elves.

Woden was bringer of Yule Log and gave birth to the figure Father Christmas .

The yule log is still a common phrase today and Father Christmas was a Old English precursor to Santa Clause .

*Thor was the God of lightning . Santa is the god of lighting everything up at christmas.

*  Thor had a palace in the Northland among the icebergs .

Santa has his headquarters in the North Pole also .

*  Thor fought the giants of Ice and Snow .

Santa battles the ice and snow to make his deliveries .

*  Thor would soar thru the sky in a chariot pulled by two large horned goats , named Gnasher and Cracker . The names of Thor’s goats Gnasher and Cracker mean teeth grinder and teeth bearer. Since Biblical times bearing of teeth and grinding or gnashing of teeth was an extreme sign of great anger and disrespect, evidence in the following
scriptures. Psalm 37:12 states, “ The wicked plot against the Righteous and gnash their teeth. “ Speaking of the final destination of these people, Christ said in Matthew 13:42, “ And  shall cast them into a furnace of fire: there shall be wailing and gnashing of teeth. “

Goats are always a symbol of something pagan or Satanic and in this case, even Thors goats names reflect this.

Santa had reindeer, since for hundreds of years they, in the northern cold regions of Scandinavia , were domesticated and Used for transportation, pulling sleds and sleighs, the switch was only logical .

*  Thor was the God of lightning and Donder, is German for lightning . Santa has a flying reindeer named Donder .

*  Thor produced thunder with his lighting strikes and  Blitzen is German for thunder .

*  Thor, being the God of lighting and thunder, his element was fire, his color red,   the fireplace in every home was sacred to him and he came down thru the chimney to his element, fire .

Santa’s color is red and he comes down thru the chimney/fireplace .

*  Thor was known as the Yule god , as well as a fertility god . (Yule log is Nimrods, who was born on Dec. 25th,
(evergreen)Tree , also a fertility symbol)Yule is synonymous with christmas and Santa.  It is Thor who lends all these traits making Santa the real world God of christmas, symbolizing lies, idolatry feasting, drinking and commerce .

This concludes the background on Satan-Claws .

THE PURITY OF TRUTH IS ONLY HELPFUL, IF YOU ACT ON AND LIVE BY IT !

BUT WE AMERICANS FORGET , ITS WHAT WE DO , ITS WHO WE ARE !

All these ugly facts were known to the Puritans , who controlled the early government that outlawed christmas from 1659 till 1681 ! ! ! ! ! ! !   They were called Puritans Because, if something was not
Biblically pure,  they were against it .

In fact christmas was so unimportant , even until after the Revolutionary War , Congress did not take the day off , but instead decided to hold its first session on December 25th  1789 ! ! ! ! ! ! !

The Founding Fathers, as well as most of Congress were all mostly Christian and thusly seem to have made this statement of their disapproval of this satanic pagan helliday by inaugurating the lawmaking branch of government, based on Biblical principles, on this day !

It took almost a century for Congress to proclaim it a federal holiday on December 25 1870 .

It figures 1+8+7=16 , 6 always seems to be involved with something of Satan !  It was only nationalized legally, due to pressure from merchants , for the money it generated . Once again , it figures , “ love of money is the root of all kinds of evil “ 1st Timothy 6:10 .

Now it was time for the American polishing of this false holy day icon .

Below left is the earliest known picture of an American, christmas icon, looking a lot like Odin !  Another  throwback
to Odin, his horse, Sleipnir, and St. Nicholas on a horse was often shown on a horse. Notice he was still skinny, as Odin and St. Nicholas was. 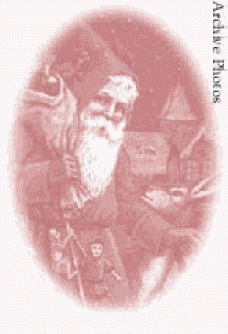 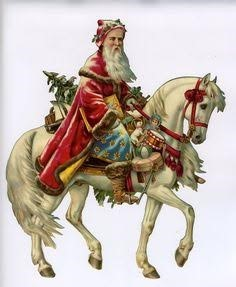 The beginnings of the American “Saint Nicholas” as distinct from the mythic Catholic Saint Nicholas can be traced to John Pintard, an influential patriot and  antiquarian, who founded the New-York Historical Society in 1804 and who included St. Nicholas in his private almanac as early as 1793 . Pintard and many others were deeply concerned
about how the Christmas and New Year’s holidays had been celebrated . Often the celebrations featured gunfire , drunkenness , sexual licentious , home intrusions (by “wassailers”), and riots .

This only further confirms the unholy origins of this holiday .

Pintard took steps to take the celebration of Christmas off the streets and into the home .

In 1810 America , due to New York being full of Dutch settlers, so much in fact , that it was formerly named New Amsterdam , it sparked a surge in interest in Dutch customs including , Sinterklaas , celebrated December 5th , with Saint Nicholas Day December 6th .  Consequently, the New-York Historical Society’s patron saint, was the Dutch Saint Nicholas . The New York Historical Society promoted St. Nicholas as patron saint of both the society and city . One of its members was the young American writer , Washington Irving . And one of Pintards acquaintances was Dr. Clement Moore who had entertained Pintard in Moore’s Chelsea estate .

These 3 men would mold the image of Saint Nicholas/Santa Clause forever .

On December 6th 1810 , the Society hosted its first Saint Nicholas anniversary dinner and Pintard commissioned artist , Alexander Anderson , to draw an image of the same to be handed out at the dinner .

Below, In Anderson’s portrayal ,  he was still known as a religious figure , but now he was clearly depositing gifts in fireside stockings in association with rewarding the goodness of children . 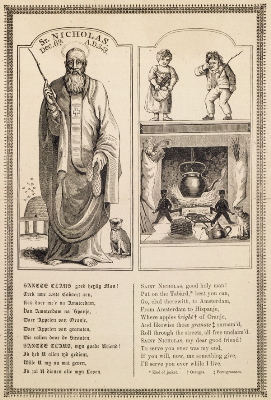 This same year ,  traits from ; St. Nicholas(gifts to children) , Odin (flying horse) and Thor (coming down chimney to fireplace) were added when author , Washington Irving , wrote about Santa in his satirical fiction,  “ Knickbockers History of New York “ , describing a jolly Saint Nicholas character , as opposed to the saintly Bishop of yesteryear .  This was not the tall saintly bishop , rather an elfin Dutch burgher with a clay pipe . Washington Irving’s Knickerbocker St. Nicholas. Notice an important stage in Saint Nicholas to Santa, involved KNICKerbocker ! 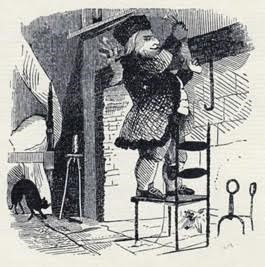 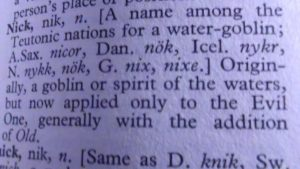 Notice the evil expression on his face and black cat with raised back on left !

Washington used traits of Sinterklass and St Nicholas , being Dutch and being on a horse and coming down the chimney . It is the description of Santa Claus bringing gifts , parking his horse and wagon on the roof while he slides down the chimney that endeared Satan’s Santa to the American public.

Santa Claus was a parasitic germ until the Knickerbocker History in 1809 . After 1809 Santa Claus spread like a plague which had yet to reach its peak .  The History of New York , Saint Nicholas description was nationally hailed as the first notable work of imagination in the New World .The next step towards securing the image of Santa Claus ,
forever , came in 1822 , in a poem entitled , “ A Visit from St. Nicholas“ , written by Clement Moore , later better known as , “ The Night Before Christmas “ . 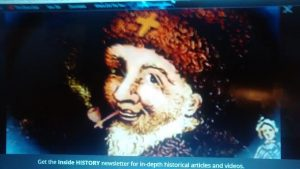 Moore drew upon Irving’s description and Pintards New Amsterdam
tradition and added some German and Norse legends from Odin , Woden and
Thor .

His verse expanded the mode of transport from a single reindeer to a team of eight , 1 for each of Odin’s 8 legged horse . Except for his size , it is Moore’s description of Santa that we most often think of today ; the frozen North dwelling , fur wearing , all-knowing, winking , sleigh riding , chimney descending , gift-giving St. Nicholas we all know today . 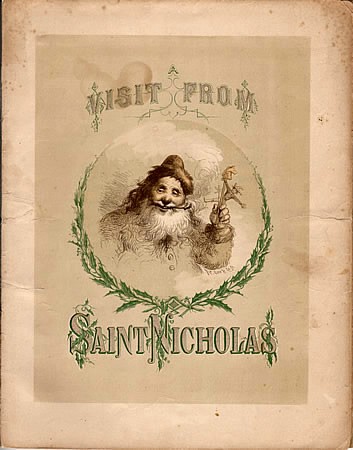 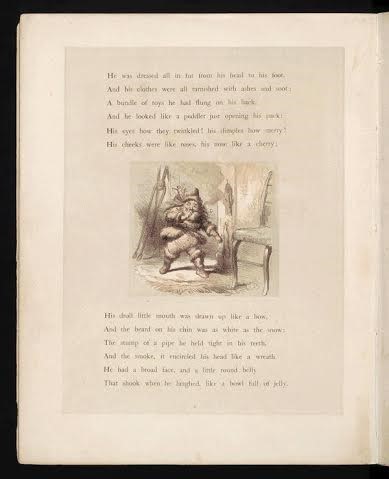 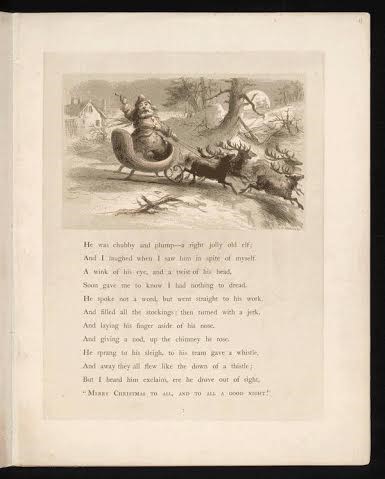 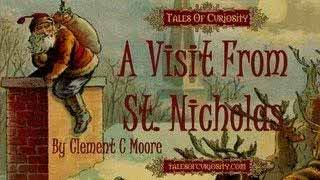 In 1863, during the Civil War , political cartoonist Thomas Nast began a series of annual black-and-white drawings in Harper’s Weekly , based on the descriptions 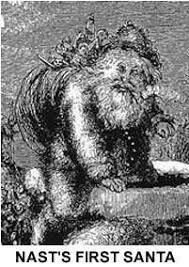 found in the poem and Washington Irving’s work . These drawings established a rotund Santa with flowing beard , fur garments , and an omnipresent clay pipe .

Nast’s Santa supported the Union and President Lincoln and is believed this contributed to the Union troops’ success by demoralizing Confederate soldiers . 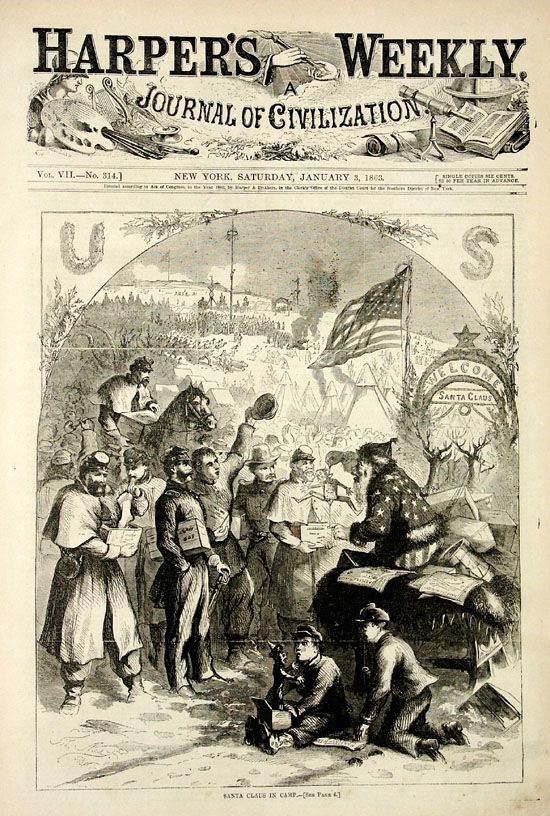 Continuing to use Santa as a moral breaker of the Confederacy, in 1863, cartoonist Thomas Nast firmly established Santa Claus current look with an illustration in an 1863 issue of Harper’s Weekly entitled “ A Christmas Furlough “. 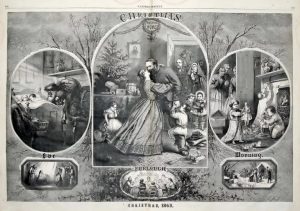 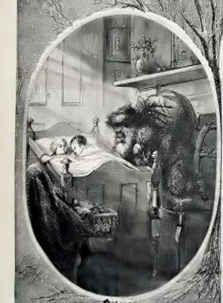 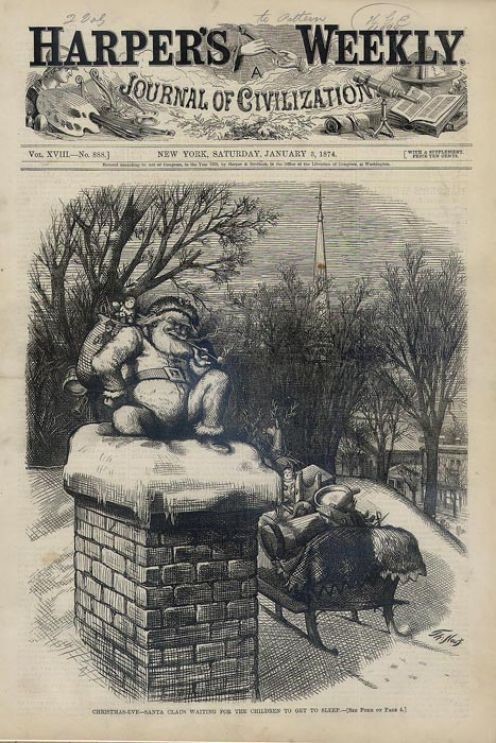 In 1881,Thomas Nast refined the modern Santa character complete with the red suit , jolly rotundity and the pipe . 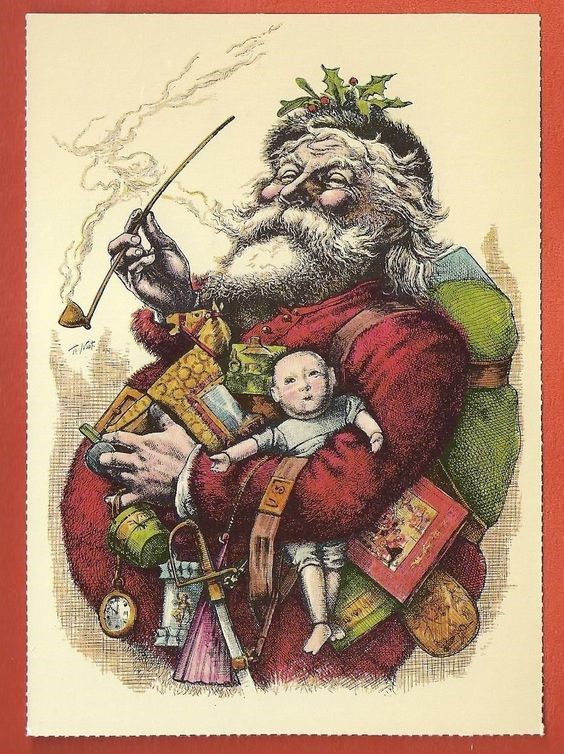 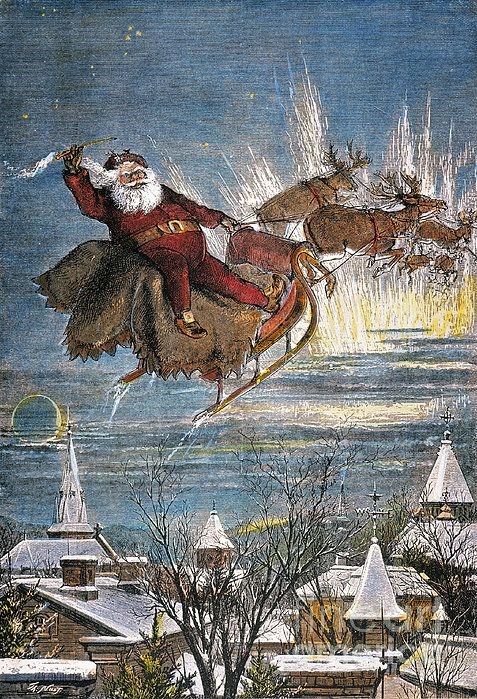 As Nast drew Santa’s until 1886 , his work had considerable influence in forming the modern American Santa Claus .

Along with appearance changes , the St. Nicholas, shifted to Santa Claus (Satan’s Claws) , a natural phonetic alteration from the German Sankt Niklaus .

The New York elite succeeded in domesticating Christmas through a new

“ Santa Claus “ tradition invented by John Pintard, Washington Irving and Clement Clarke Moore . Moore’s poem was printed in four new almanacs in 1824 , just one year after it was in the Troy , New York , paper .

The poem and other descriptions of the Santa Claus ritual appeared in more and more local papers . More than anything else , “ A Visit From St. Nicholas“ introduced the custom of a cozy , domestic Santa Christmas tradition to the nation.

Santa replaced Odin, Woden and Thor just at the time when Christianity was replacing paganism ! The Christian faith forbids the observance or worship of Odin,

Thor, Woden or any other pagan god, or even a, so-called verifiable , Catholic Saint Nicholas, or his alter ego, Saint Nick, meaning Satan ! So, Satan’s false festive persona , Santa Claus , (Satan’s Claws) , fits right in ! How cunningly , diabolically , deceptive Satan is to cause most of the entire world to mistakenly worship him as they think they are honoring Christ ! ! ! ! ! ! !