THE MARK OF THE BEAST

DAGON the Fish god called leviathan in scripture was worshipped by those in ancient Babylon and associated with Nimrod the first High Priest of Dagon .   Worship of Dagon spread from Babylon, after YAHUWAH confused the languages and scattered humanity across the globe, after the destruction of Nimrods Tower of Babel . It was this religion, the Chaldean/Babylonian Mystery Religion, that was prevalent and continued at the time Rome destroyed Jerusalem.  It was this religion of Dagon that permeated the high priestly ranks of paganism and was the foundation of The Catholic Church which even today continues to wear the priestly garments of Dagon (dragon) ! Satan the father of this church is the dragon , serpent of old . Revelation 12:9 states , “ the great dragon was thrown down, the serpent of old who is called the Devil “ .

Dagon is where the word dragon came from . Revelation 12:9 says Satan is the Great Dragon . The Mystery Religion of the Great Babylonian Whore (Catholic church) and all her customs and symbols, comes from this Dagon , Dragon , Satan !

Revelation 13:1states ; “ I stood upon the sand of the sea , and saw a beast rise up out of the SEA , having seven heads and ten horns, and upon his horns ten crowns, and upon his heads the name of blasphemy “ .  The “ blasphemy “ is all the lying, corruption and perversion of Biblical truth, she has committed.

Revelation 13:18 states , “ Here is wisdom . Let him that hath understanding count the number of the beast : for it is the number of a man ; and his number is Six hundred threescore and six “ .

Dagon is mentioned in Samuel, Chapter 5, when the Philistines(Satanic worshipping people) captured the Ark of the Covenant and placed it in the Temple of Dagon Two nights later , “ Dagon was fallen upon his face to the ground before the Ark of the Lord ; and the head of Dagon and both the palms of his hands were cut off upon the threshold ; only the stump of Dagon was left to him “ . This is a parallel to when Noah’s grandsons cut Nimrod into pieces and scattered his parts thru out his kingdom of Babylon. It is this character upon which Satan is based, Serpent, Dragon, Beast of the Sea.

Dagon , the Babylonian fish god , is associated with the forehead and hands , the location of the mark of the beast, being on the head and hands. Notice: Dagon’s crown at the top is a 6 p pointed star hexagram , 666 symbol . (note: see chapters 31a the Hexagram and the previous chapter, Whose number is 666 ?) 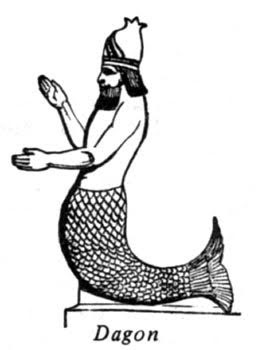 2. In the Mystery Religions , of Babylon  followers foreheads and hands , during rites of initiation , were tattooed and in the yet future Babylonian mark of the beast, both the forehead , (seat of choice) and hand (buy or sell) will also be marked, by the Mark of the Beast ! This is the reason Dagon’s hands and head were cut off and why you will be cut off from Our Heavenly Father , if you choose to receive the mark of the Beast ! The Bible is full of duality and symbolism .

Will you follow the procession of the many who have been deceived by all of the Dragons lies that this Babylonian Whore has so craftily concocted , that are abominations in the sight of The Almighty Creator , Yahuwah ? ? ? ? ? ? ?

Job.41:5 , “ In that day the Lord with his sore and great and strong sword shall punish leviathan the piercing serpent (pierces Christians faith by false teaching symbolized by Satan’s pitchfork and Poseidons/Neptunes Trident of the sea) , even leviathan that crooked serpent ; and he shall slay the dragon (or Taneem in Hebrew) that is in the sea .”  Once again Scripture , symbolism ,and historical truth align !

Revelation 18:4 states , “ I heard another voice from heaven , saying ,

Come out of her (that whore of the Babylonian Mystery Religion) , my people, that ye be not partakers of her sins , (false teachings) and that ye receive not of her plagues “ .

THE MARK OF THE BEAST:
Revelation 13:16-18 states, “ And he causeth all, both small and great, rich and poor, free and bond, to receive a mark in their right hand, or in their foreheads: “
[Your hand is your body part symbolizing the action of payment.

Your forehead is where your decisions are made.

This is the definition of the ” Mark ” !]
Continuing with the Scripture: “ And that no man might buy or sell, save he that had the mark, or the name of the beast, or the number of his name.
Here is wisdom. Let him that hath understanding count the number of the beast: for it is the number of a man; and his number is Six hundred threescore and six. “ 666.
As just previously shown, 666 repeatedly identifies the Roman Empire, and the Roman Catholic Church.
This is referring when, in the near future, the Beast Empire, the E.U., for a brief period, controls the worlds economy, imposes their world sun worship day of observance(as Germany already has), Sunday, upon the world, in order to obtain goods or services.

THE MARK OF ALMIGHTY GOD:
You shall love the Lord your God with all your heart and with all your soul and with all your might. These words which I am commanding you today shall be on your heart. You shall bind them as a sign(mark) on your hand and they shall be between your eyes on your forehead. (Deuteronomy 6: 5, 6, 8) This is the definition of the mark of Almighty God.
Notice the location of Almighty Gods “ sign “/mark of identification is also on the forehead and hand !
In Revelation 7, 14 and 15, we see that those who are victorious are marked by the following characteristics:
* Name of God. Revelation 14: 1. They have the name of the Lamb and the Father written on their foreheads instead of the mark of the beast.   They did not worship the beast and/or his image. Notice the common thread of IDOLATRY(“ image “) worship. Babylon, Rome, and the Roman Catholic church all worship images !
* Law keepers. Revelation 14: 12. They keep the commandments of God and have the faith and testimony of Christ, without any added Catholic Doctrines of Demons.   The “ law “ has not been repealed by the new covenant, under the Satanic Catholic Father of Doctrine of Devils, Grace Only Doctrine.(see last chapter Doctrines of Devils- Grace Only))
* Pure. Revelation 14: 4. They were not defiled by the Great Whore who rides the Beast. They worship on the Saturday Sabbath, trusting Him for their needs, ignoring the Beasts Catholic worldwide decree, to receive the Mark of the Beast, in order to  “ buy or sell “.

They remain loyal to Almighty God.
They keep the “ test “ Commandment.(Exodus 16:4)
This “ test “ gives Almighty Gods people their MARK / “ SIGN “ of identification !
The Almighty tells Moses, The Lawgiver, “ Speak also to the children of Israel, saying: ‘Surely My Sabbaths you shall keep, for it is a sign between Me and you throughout your generations, that you may know that I am the LORD who sanctifies you ’.” (Exodus 31:13). Sanctifies means set apart by Almighty God.

The characteristics of a Seal. There are 6 essential elements in a seal needed to authenticate a document. The first three are generally stamped on the physical seal. The last three are the power behind the authorization.

The Seal Of Almighty God. God’s seal also contains his name, his title, and his territory. There is only one law that contains these characteristics.

The Seal Of The People Of Almighty God.

The people of God receive the seal in their foreheads (Revelation 7: 3).