For more Catholic abominations and atrocities fast forward in history to the time of World War II when Mussolini, who by the way , his mother was devoutly Catholic , teamed up with Hitler who was also raised Catholic. The Catholic tradition of violence in the Dark Ages, Crusades and Inquisitions fit Hitler’s and Mussolini’s bloody agenda perfectly……

Believe it or not, Hitler went to a Catholic monastery school , whose coat of arms symbol had a swastika on it. Notice on the first image , the T , H standing for Theoderich Hagen and the A , B standing for Abbey at Lambach Austria. 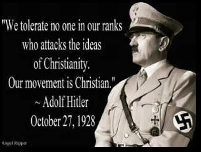 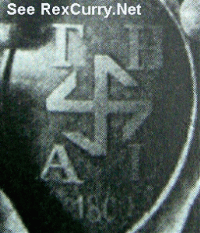 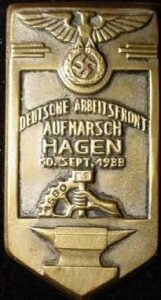 Even after all of this , I was even shocked at this obscure fact .

The more I learn the more I realize how bizarre, warped, and twisted the mind of man can be . So these two Catholic raised , sick individuals , teamed up for more bloodshed , not only caused by the barbarism of war , but by the atrocities of the 6 million of Jews killed in the Holocaust , 60 million others killed , over 6 years time !  I was once again amazed , to see the Beasts number , 666 , stamped on this World War ! ! ! ! ! ! !  It makes perfect sense, when you know that Hitler made almost all his fiery, maniacal war frenzy inspiring speeches from a replica of Revelation 2:13’s , “ Where Satan’s seat is “…. “ where Satan dwelleth “ . Read chapter 119 for amazing background !

After the Christian world led by Britain and the U.S. defeated this unholy alliance , the Catholic Church covertly evacuated Nazis to South America in a program called the , The Rat Lines”.(How appropriate). It should also be noted that the Catholic Church has never offered any apologies for this and several popes have say the  Holocaust was exaggerated and even denied the Holocaust  ever occurred !  Talk about an abominable lie !

This is all  historically documented and easily verified, please don’t take my word for it or any of this for that matter, for as 2nd Thessalonians 5:21 says , “ PROVE all things , hold fast that which is good. “ I certainly do !

If more people DID this , the lies of Sunday Sabbath , Christmas and Easter and any of the other traditions the Catholic Church has embraced and propagated would not have become so accepted and entrenched . More of these Truths would be uncovered if not for the wolf in sheep’s clothing personality of Satan’s great false church !

In fact on September 4th 1923 the Catholic Church said, “ it is the supreme authority , it is above the Bible and Sunday Sabbath is its mark of authority. “

Otherwise more of these Truths would be uncovered . But thanks to the supernatural power of the Holy Spirits, Spirit of Truth, these stronghold lies are torn down !