IT IS EVEN MORE EVIL THAN THIS ! OBAMA’S THRONE OF SATAN

Please be patient for the connection to Obama since a detailed background history is necessary first .

Revelation 2:12 states: “ and to the angel of the Church at Pergamos write ; These things saith He which hath the sharp sword with two edges;

I know thy works, and where thou dwellest, even WHERE SATAN’S SEAT IS :

and thou holdest fast my name, and hast not denied my faith, even in those days wherein Antipas was my faithful martyr , who was slain among you, WHERE SATAN DWELLETH “ .

I generally quote the King James Version however other translations have seat of Satan as the THRONE OF SATAN .

Since Satan is the God of this world, ( 2nd Corinthians 4:4), where his

Pergamos , Greece was known as the Temple Keepers of Asia . This was Because it was the center of pagan worship , hence “ where Satan Dwelleth “ and “ where Satan’s seat is “ .

There were three pagan temples there ;

One was the Great Altar of Zeus which is the head of the Greek Gods , as Satan is head of the demons , hence the throne of Satan .

The similarities of the description of the Greek god , Zeus , to Satan are amazing ! Here’s how ;

* Zeus was extremely pridefull and arrogant .

Satan’s pride and arrogance caused him to think himself like Almighty God .

* Zeus drew lots with his brothers Poseidon and Hades in order to decide who would succeed their father on the throne .Zeus won the draw and became the supreme ruler of the Olympian pagan gods .

Satan became God of this world and supreme ruler of a third of the angels , that accepted his authority and became Demons .

* Zeus was a master of deceit and disguise .

Satan is a master of deceit and disguise .

Thru ALL the following things he Deceives the whole world . Revelation 12:9 .

Satan is the father of lies (John 8:44) and Satan always disguises himself ,as many things one is as an angel of light (2nd Corinthians 11:14) .

It would be easy if Satan came as he is often portrayed , with horns and a pitchfork . We would naturally flee this ugliness . He is much to deceptive for that . He often comes cloaked in beauty or in sheep’s clothing , like his sweet slick salesman Santa Clause (Satan Claws) for Satan’s big sun /Satan worshipping day , Christmas .

He claims to offer US freedom and autonomy from an unreasonable Almighty God and Church , liberation from rules and being “ told what to do .” He cloaks himself in the false Righteousness of being “ tolerant ” and “ not judging others .”

He exalts us by telling us we have finally come of age and can disregard the“ hang-ups ” and “ repression ” our ancestors had of sex and pleasure .

He flatters us by extolling our scientific knowledge (like the ridiculous explanation of creation , The Theory of Evolution- see chapter 5-13)and inflates US by equating it with wisdom and moral superiority over our “ primitive ” fore-bearers .

He reassures US by insisting we are merely the victims here , victims of biological urges , bad parenting , economic injustice , that we are not depraved , just deprived . He humors us by making us laugh at sin , making light of it in comedian’s routines , sitcoms , music and otherwise turning sin into a form of entertainment .

He anesthetizes the pain of guilt and sin by sending US teachers who tickle our ears and assure us that what we know deep down to be wrong is actually fine , even virtuous .

He affirms us by insisting that whenever shortcomings in us have been called to our attention it is simply unfair since other people are surely worse (deflection- 1 of Satan’s 6 D’s of Destruction ; deception, distortion, delusion, denial, distraction and deflection), that self-esteem is something owed to US and others who lessen it are unkind .

He sings us the lullaby, a symphony of destruction, of presumption assuring us that consequences and judgment will not be our lot and with this lullaby we drift off into a moral sleep of indifference , false confidence and complacency.

* Zeus was called the God of this world by many ancient cultures.

* Zeus is father of Apollo .

Satan is Apollyon ! HERE IS REVELATION 9:11 “ And they had a king over them , which is the ANGEL OF THE BOTTOMLESS PIT (and of light – do you see it ?), whose name in the Hebrew tongue is Abaddon , but in the Greek tongue hath his name Apollyon . “

Make no mistake, this Alter of Zeus , that was Satan’s Throne , was there !   As further proof Zeus is directly connected with Satan, another Altar of Zeus for human sacrifice has been found  on a mountain top in Greece ! See this site below, https://www.biblicalarchaeology.org/daily/ancient-cultures/daily-life-and-practice/ancient-greek-human-sacrifice-at-mountaintop-altar/

A second altar , to the Goddess Athena ,Goddess of wisdom (mans higher power)and military victory (war) and a , third one to the Roman Emperor .

Rome wanted the people of its empire to worship their Emperor as a God , just as Rome wants its Pope worshipped .

Pergamos was the CENTER of pagan worship (hence the title Temple Keepers), in this part of the Roman Empire , Asia Minor . It was a luxurious and advanced city , Used as a symbol to keep people in worship of the Emperor , with the largest library at the time and complete with a healing center called , Asklepion , named after the Greek Serpent Almighty God , Asklepios .

Here is the remains of the entryway to Asklepios. 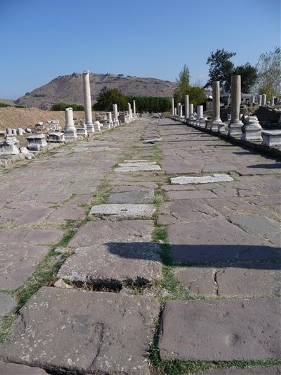