THE WAR STARTED FROM THE THRONE OF SATAN’S MARKED WITH THE NUMBER OF THE BEAST,

Perhaps you might say this is a stretch , but when you consider ; 6
million Jews sacrificed , 60 million total sacrificed in the war and
this occurred over 6 years , you arrive at the number 666 ,the number of
the beast !   This is further confirmed by the fact that this war was
started by the 6th resurrection of the Beasts Empire !  (note see chapter 39, 7 resurrections of the Beasts Empire)

One final point on this subject the word Holocaust is derived from
the Greek word “ holokauston “ meaning , “ wholly burnt up sacrifice for
Almighty God “, but these sacrifices are to the evil God of this world ,
Satan !

The previous chapters 119 & 120 showed at the center of the
original throne of Satan was a hollow bronze bull to burn sacrifices ,
now in this replica of the throne of Satan , Hitler’s podium replaced
the bull and was the starting point of 6 million more fire sacrifices in
the ovens of the Holocaust concentration camps !

Surely even the name , Nazi , says they could not-see , how evil their actions were .
Finally , to the connection of the Altar of Zeus , Throne of Satan , mentioned in Revelation 2:12 , to President Obama .

In 2008 (new beginning, this time not a good one) Obama gave his
Berlin speech in front of Berlin’s Victory Column , a Nazi symbol of
world domination , where Hitler had planned to enthrone himself in the
Welthauptstadt, Germania .    Obama saluted the German audience in a way
really similar to what Adolf Hitler Used to do , followed by thousands
returning the salute , which is actually against German law ! (Because
of the loyalty to evil, Hitler inspired )

What kind of power does this man ,Obama , have to mislead people ?

He said ; “ with an eye toward the future with resolve in our hearts
let US remember this history and answer our destiny and remake the world
once again “ .This is exactly what Hitler had promised to do and
exactly where he had planned to memorialize it ! ! ! ! ! ! !     Right
after this , the president went to go visit the Pergamum Altar , Altar
of Zeus, Throne of Satan !

As soon as Obama got back to the U.S. , he immediately insisted upon
commissioning a construction of a replica of this , Altar of Zeus
\Throne of Satan !

WOW ! The New York Times recognized what it was ! Not many else did
!  But that’s due to the powers of evil and deception associated with
this throne Obama visited and requested be reconstructed for his
acceptance speech ! ! ! ! ! ! 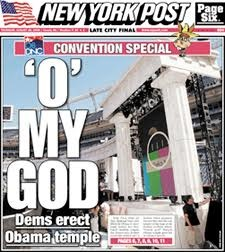 Notice the page number this story is on is 6 !

Another paper,  this one from the U.K., The Daily Mail, made this observation in the August 27 2008 edition, ” Barack Obama was mocked in the American press yesterday for making the most important speech of his life on a set decked out like a ancient temple. ”

I asked you why would this President go to and surround himself with so
many anti-Christian symbols ? Perhaps this may shed some more light on
the subject.