Adolf Hitler said , “ If you tell a lie so colossal that no one would believe that someone could have the to distort the truth so infamously “ . 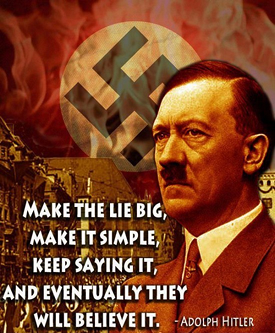 Hitler also said, “ what you tell people in the mass, in a receptive state of fanatic devotion ,will remain like words received under a hypnotic influence , ineradicable, and impervious to every reasonable explanation …. “ a new age of magic interpretation of the world is coming , interpretation in terms of the will and not of the intelligence “ .

Wow , that’s scary , Hitler’s quote fits perfectly to what is happening in our society ! There isn’t any reasonable , natural explanation for how Obama gets away with what he says and does and the effects they have brought .

As I said earlier, there isn’t any natural explanation, but there is a supernatural one !

How else do you explain it ?  The American public is not that stupid , deceived and distracted maybe, but that has its same origins as this spiritual blindness. . . . . . .

This is the type of influence the public have been under since the presidents first campaigning and early presidency .  This was only encouraged by the swooning of the press .