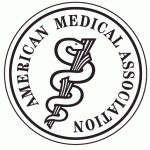 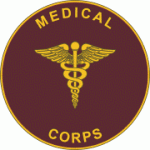 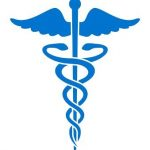 The evil of western medicine starts to be revealed in the origins of the Rod of Aesculapius . In Pergamum , Asia Minor , a province of the Roman Empire , at the time of Christ , this was the center of Satanic/pagan worship and sacrifice and where the “ Seat of Satan “ was , and “ where Satan dwelleth “ (Rev.2:12-13) .  The Apostle Antipas was martyred (burned alive) for spreading the Gospel of Christ and specifically healing people , interfering with the popularity of The Asklepion Healing Center named after the Greek god of medicine , Asclepius .   Patients entering this healing center , beneath a sign that said , “ death is not allowed here “ , would enter through a tunnel ( like a snake ) , drank a strong sedative and spent the night in rooms where nonpoisonous snakes crawled around them and on them , all night to receive their healing . If one were to bite you it was considered a good sign of assured healing . The next morning the dreams they had , under the effects of the sedatives or drugs , were told to the pagan priests there and a diagnosis and treatment were prescribed . They would then perform treatments of drugs , herbs , spells , incantations , offerings and sacrifices to pagan gods .

This is known as the Greek word, “ pharmakia “(pharmacy), meaning drugs or spells, or in other words , works of the flesh of man , as opposed to work of the Holy Spirit in US , mentioned in the Bible , in ; Galatians 5:22, Revelation 9:21 , 18 :23 and 22: 15 .     In our English Bible and in concordances, this word is translated as witchcraft or sorceries Because from then until about 400 years ago the only ones who Used drugs were witches and sorcerers to hallucinate to see and get in touch with evil spirits ! Besides pharmakia , clay sculptures of body parts to be healed , were made and Voodoo like spells were performed . Traditional medicine was also practiced there .
The part about the female being beaten to death with sticks is especially relevant , lending the early Greek attitude of the lowliness of women to our male-dominated western medical system that considers virtually all female physiology to be disease (pregnancy , menstruation , etc.). Women are treated like animals in many ways, through endless breast cancer screening and mandatory HPV vaccines . Female organs are considered Useless or disease-ridden , such as when hysterectomies were performed to remove women’s “hysteria”(madness).   That’s where the name “ hysterectomy “ actually comes from , of course , the removal of hysteria !    Remarkable, how when we learn the origins of things, we learn their true meaning !

Hermes , carrier of the Rod of Aesculapius/Rod of Caduceus , serpent entwined staff , is the protector of liars and thieves and the word caduceus is derived from the Greek word kerukion meaning public announcer .

The biblical meaning of the two snakes symbolizes evil and deception .   It is indeed fitting that public announcement of repeated premature F.D.A approval , without enough testing , of dangerous drugs to the public , only to have crippling or deadly side effects manifest , after the drug companies have made billions !  What do they care if millions in lawsuits arise after BILLIONS IN PROFITS !   The medical profession and drug companies would rather keep you medicated for life than cure you , there is more money to be made ! That’s why they have suppressed Holistic , herbal , and nutritional cures and prevention for years ! Our Heavenly Father set man in a garden , with fruits , vegetables, for healthy eating and flowers , plants ,herbs and spices for medicine !

Continuing with the analyzation of the symbolism of the Sabbatic Goat……………… 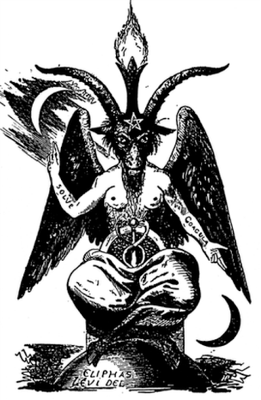 Notice on one arm of the Sabbatic goat it says solve and on the other coagula . Solve means separate , coagula means join together . Clearly this is but one symbol Used to join together Satanists around the world . The significance of Solve or separate is made abundantly clear in Matthew 25:25- 33 , “ When the Son of man shall come in his glory , and all the holy angels with him , then shall he sit upon the throne of his glory: And before him shall be gathered all nations: and he shall separate them one from another , as a shepherd divideth his sheep from the goats , And he shall set the sheep on his right hand , but the goats on the left “ . Notice the sheep or flock are on the RIGHT !

Now , Christ reveals what He shall do to these people He is calling “ goats “ .

“ Then shall he say also unto them on the left hand , Depart from me , ye cursed , into everlasting fire , prepared for the devil and his angels(Demons)“ Matthew 25:41
The next step of cementing the goat as a symbol for Satan , the Sabbatic Goat came when it was combined with the ancient satanic symbol of the pentagram in 1895 by French satanic occultist , Stanislaw de Guaita , in his book , “ La clef la magie noir “ ( the key to Black Magic) . 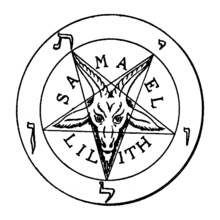 The Hebrew letters at the Five Points of the pentagram spell out Leviathan . Leviathan is another name for the Satanic sea beast serpent or dragon .   Isaiah 27:1 states , “ In that day the LORD with his sore and great and strong sword shall punish leviathan the piercing serpent, even leviathan that crooked serpent; and he shall slay the dragon that in the sea “ .
Also on this symbol is Samael , which in Hebrew means Venom of God or poison of God . Samael is an important Archangel in Talmudic lore regarded as both Good and Evil being a figure who is an accuser (Satan) , Seducer and destroyer . Satan is described as a an accuser , seducer and destroyer , in the Bible .  Finally on the symbol the name Lilith can be seen . Lilith is a female demon spoken of in the Kabbalah .This demonic figure is an abomination in yet another way in that it is both male and female as evidenced by the sabbatic goat having breasts .

The host international organization of all satanic churches , known as the Church of Satan , was founded in 1966 , in the Black House in San Francisco, California on the night of April 30th , Walpurgisnacht , or Hexennacht(Hex night), being , “ witches night “ , a festival of 8th century German origin . It is no surprise that the Church of Satan would have been founded in the Black House , on this night , in 1966 , since , “ they (Satan’s devoted) are doomed forever to BLACKEST DARKNESS “ . Jude 1:13 and 6 is Satan’s number .

The founders real name was Howard Stanton Levey (18 letters , 6+6+6) .The founder proclaimed it , “ Anno Satanas “ meaning , “ The Year One “ the first year of the age of Satan ! He wrote “ The Satanic Bible “ and “ The Satanic Rituals “ . When its founder died , its headquarters were moved to Hell’s Kitchen , New York City . How perfectly fitting !

A direct chapter church of this , in Detroit , is called , The Babylon Grotto was the inspiration for this latest Church of Satan , The Satanic Temple/the Church of Baphomet , also in Detroit (just detailed above). Babylon was the first world ruling empire , that reinstituted idolatrous practices to the world , just after the Great Flood cleansed the Earth from them , that came to be the foundation of the Babylonian World System we are under today , as well as all the worlds Satanic pagan sun-worshipping holidays it observes , that maintain Satan’s title of , “ God of this age (world) “ 2nd Corinthians 4:4 . Perhaps this is why Detroit is home to something called Devils Night , where on October 30 of each year massive arson fires and vandalism are committed citywide !

Obviously any NEW church , especially , in Detroit , in the heartland of the, “ One Nation Under God “, with origins , background and connections such as these, is a sign,  we are truly, in the Last Days !
Vaticans Satanic Throne :

The Catholic Church has never concealed it’s Anti-Christ Spirit, relying on Satan’s powers of deception to go relatively unnoticed, but has gotten even more blatant lately, testifying that we are truly in the Last Days !   Here is a picture of what many are calling the Vatican satanic throne . 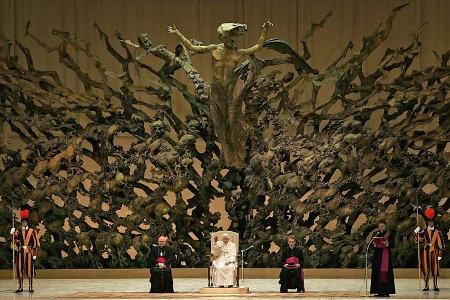 Most of it is actually hard to distinguish what it is , except for the figure supposedly of Christ that doesn’t look peaceful , powerful , handsome , triumphant or any other holy attribute that Christ should be , but instead looks agitated , hostile , sickly , beaten , twisted and all things unholy and satanic , with its hands raised in a menacing , monstrous fashion , demonic !

Although hard to distinguish , the surrounding background looks equally unholy , resembling twisted figures writhing in agony as if in hell or body parts(skulls, faces and bones), with parts of it resembling flames ! In fact in one of the images shown , parts are highlighted with red light to further make it look like flames ! 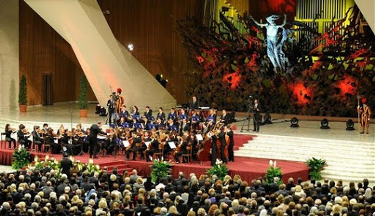 Coincidence ? Read chapters 23g , 42 , & 119-121 to fully realize most anything of Satan is marked with this Number of the Beast .  Then realize this was built during the reign of the most ant-Israel, Ant-Christian President ever(see chapter 101, 102, 117 for positive proof), who turned this country into an Obama-nation, by the legalization of gay marriage ! (Leviticus 18:22, and 20:13) 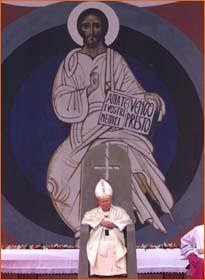 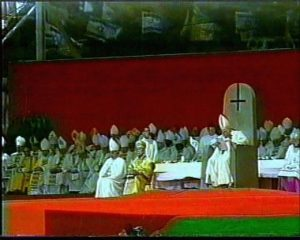 This is a certainly fitting chair/throne for Pope John Paul II , when you consider that when his name , in the official language of the Roman Catholic church , Latin , Ioanes Pavlus Secundo , is added up in its ROMAN numerical equivalent , it adds up to 666 ! 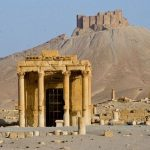 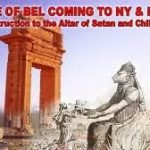 Baal/Bel was the primary Satanic god just before and after the time of Christ .

He is associated with Satan and was likely an embodiment of him .

It is interesting to note Satan was the first rebel as he rebelled against the Creator and this chief Satanic god is Bel as in re-bel ! He had such a stronghold on mankind , he even drew The Creators Chosen People ,Israel , away from Him .     Human sacrifice Usually with ritual children and bi-sexual orgies were performed in honor of this God .  Baal is mentioned several times in the Bible . 2nd Kings 17:16-17 states , “ And they left all the commandments of the LORD their Almighty God, and made them molten images , even two calves, and made a grove , and worshipped all the host of heaven , and served Baal. And they caused their sons and their daughters to pass through the fire , and Used divination and enchantments , and sold themselves to do evil in the sight of the LORD , to provoke him to anger .

2nd Chronicles 28:1-3 states , “ Ahaz was twenty years old when he began to reign, and he reigned sixteen years in Jerusalem: but he did not that which was right in the sight of the LORD , like David his father . For he walked in the ways of the kings of Israel , and made also molten images for Baalim . Moreover he burnt incense in the valley of the son of Hinnom, and burnt his children in the fire, after the abominations of the heathen whom the LORD had cast out before the children of Israel . He sacrificed also and burnt incense in the high places , and on the hills , and under every green tree . “

Baal was the head Satanic god before and after Christ , so much in fact there were many Baals or Baalim , Gods of specific authority and places named after them !    (see chapter 23b , subtitle , Baal or baal)

The inhabitants of Baalbek feared Baal. This God was their name for Zeus also known as Jupiter and Amon. Humans were sacrificed in an attempt to pacify him and prevent huge destructive earthquakes. They believed by their actions they could appease and influence the Gods