Clearly this Jacobs/ Israel’s Stone , consecrated at Bethel, having so much importance to Almighty God ,Almighty God Himself called Himself ,The Almighty God of Bethel, that he Used it to insure Israel’s survival, through the supplying of life giving  water,

( a symbol of the Holy Spirit) and Used it as a coronation throne or altar, is an enduring symbol of Israel’s identity . Remember when I say , Israel , I do not mean the modern country of Israel , but referring to the Lost Ten Tribes of which Britain , the U.S. ,Australia and New Zealand and are the main members.

In Genesis 28:18, where Jacob was at Bethel , where Almighty God led him to the stone , he anointed it with oil which is a sacred symbol typically only done for Kings, priests and some prophets . The stone is the only stone to be anointed making it the anointed one just as David was anointed with oil in , Samuel 16 :12 -13, he became the Anointed One , as Christ was to be the Anointed One of Almighty God . The parallel being , King David led Almighty God’s people on earth as Christ leads  spiritual Israel ,( the church ) on earth .

Psalm 89 3 states ; “ I have made a covenant with my chosen , I have sworn unto David my servant THY SEED WILL I ESTABLISH FOREVER and build up thy throne to ALL GENERATIONS  “.1st King’s 9:5 states; “ then I will establish the throne of thy kingdom upon Israel , FOR EVER , as I promised to David thy father saying , “ There shall NOT FAIL thee a man upon the throne of Israel “ .

These two scriptures say David’s seed shall be a CONTINOUS line upon the throne , FOREVER And Luke 1:32 says Christ shall take over David’s throne ,

“ He shall be great and shall be called the Son of the Highest and the Lord Almighty God shall give unto him the throne of his father David and he shall reign over the House of JACOB forever and of his kingdom there shall be no end “ .

Where has been and is this anointed , Stone of identifying “ sign “ , of Gods people Israel , the “House of Jacob “ ?

In plain sight under the Coronation Chair of England ! 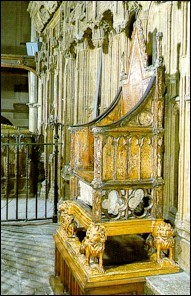 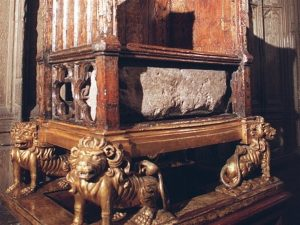 Notice the chain rings that the Israelites Used to transport it with them thru the wilderness !

Because of Sabbath breaking and falling into idolatry ,in 745 BC Israel was taken into captivity. At this point the Bible purposely makes little mention of the stone Because the stone was a physical identifier of Israel and as stated earlier in this site , the Sabbath is an identifying “SIGN” observance of Almighty God’s people, and it was Gods will that they lose their identity  , so Almighty God purposely obscures the stone so they CANNOT be identified .

If Israel was not going to act like Gods chosen , He would make them appear as if they were not ! You reap what you sow .
Exodus 31:13 states; “ speak thou also unto the children of Israel, saying, verily my Sabbaths ye shall keep for it is a SIGN between Me and you , throughout your generations, that ye may know that I am the Lord that doth sanctify you “ .

This is the reason why today The Lost Tribes of Israel Britain, the U.S. , Australia & New Zealand  have lost their identity and require works like this to prove who we are. We have been deceived like most of the world into accepting the Babylonian ,Catholic Sabbath of Sun worship ,Sunday.
A reiteration of Gods removing Israel’s identity Because of Sabbath breaking is related in 2nd Kings 17 18 , which states , “ therefore the Lord was very angry with Israel and removed them out of his sight :there was none left but the tribe of Judah “. What is meant here is , Almighty God removed  them from the Holy Land and scattered them , caused them to lose their identification , making them invisible to the world , in other words “ out of sight  “ .

shows that the tribe of Judah was the only part of Israel that was left NOT ,     “out of his sight “ and left IDENTIFIABLE !

That is why Judah or the Jews are perceived as being all there is to Israel .

So even though Because of this, the Bible gives little or no evidence of the whereabouts of the stone, it is logical to assume that Because of its importance it would remain in the possession of some part of the tribes of Israel even during their punishment of captivity .